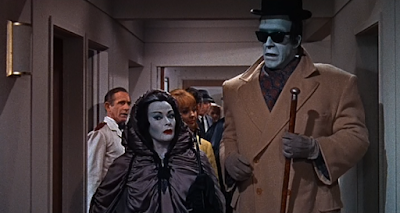 The Munsters is one of the beloved comedy series of the 1960s. The show revolved around a family of monsters in a bit of a parody of the family shows of the era. It ran from 1964 to 1966 for 70 episodes and had some success in syndication. Its still available for viewing on some rerun channels today.

Munster, Go Home is a continuation of the series that features the main cast of the show with the exception of Marilyn, the family's only human, who was recast. Fred Gwynne, Yvonne De Carlo, Al Lewis and Butch Patrick all return as their respective characters. It received a theatrical release and it was the first time The Munsters were ever seen in color as the whole 70 episode run was in black and white. Production on the film began right after the end of filming for the second season of the show. Earl Bellamy, a director of some of the episodes directed the film.

The film starts off with Herman Munster (Gwynne) learning that he has inherited the Munster Hall in England so he and his family travel to England to move in to their new home. However, the first half hour of the film takes place on the boat to England. Marilyn meets a young British man and the rest of the family starts to turn heads among the public. When the family reaches their new home they meet their new cousin Freddie Munster who much rather do away with Herman by entering him in a race.

The awkwardly large Fred Gwynne stands out much like did in the show. Most of the humor relies solely on his shoulders and in my opinion he's still not as funny as he was on the show. I have to admit that kind of missed the laugh track that the show had because I feel like it would have made me more receptive to the jokes. The whole plot probably would've been better used as a normally episode of the show rather than trying to drag the story out to a feature film length. Putting the Munsters in a different environment can only provide so many jokes.

So frankly, the film really isn't that good and as a casual fan of the show I would recommend watching the show before ever considering Munster, Go Home. It doesn't feel very even and the story telling isn't really smooth. It almost feels like its split into 3 half hour intervals so maybe it could've aired on TV in 3 parts

Munster, Go Home isn't a necessary watch for anyone who isn't a true fan of the show and it hasn't stood up as well as the show after 50 years.