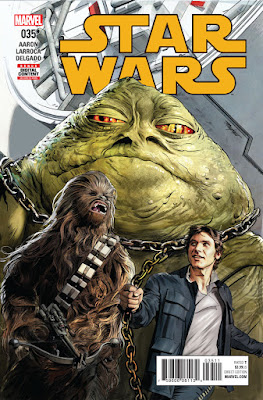 Issue #35 of the main Star Wars line will be the third of these small "one and done" that are set to end after 5. Following the completion of this issue Jason Aaron, who has written every issue apart from the annuals will be 2 issues away from leaving the series in favor of Kieron Gillen.

The issue starts by proving that the timeline is getting close to Empire Strikes Back as Han immediately starts to question why he is still involved with the Rebellion after its likely been more than a year since the destruction of the Death Star. He meets with Mon Mothma who has approached him with a smuggling mission. His cargo happens to be Grakkus the Hutt. Grakkus supposedly has a safe house full of weaponry and supplies that the Rebellion wants. Grakkus however is a much stronger Hutt than we are used to seeing with Jabba. He's much more of a physical threat and Han doesn't feel comfortable at first.

Han agrees to do the mission as expected and he continues to question why he's developed such a heart since meeting up with Luke Skywalker and Leia Organa. Han obviously enlists his partner Chewbacca for help and there is some pretty fun dialogue between Han and Grakkus (who speaks Basic).

This is really a classic Han Solo/Millennium Falcon mission. They run into Imperials and something starts to go wrong with the ship. It truly feels like I was watching the Han Solo I loved from the original trilogy. Grakkus tries to manipulate Han by questioning his role in the conflict and offering him the option of letting him go in exchange from a clean record from Jabba. Han's refusal forced Grakkus to turn on him but Han manages to be one step ahead just like I had hoped.

This is a comic that anyone who wants a good stand alone story should read. Its probably the best of these single arcs. R2-D2 looks to be getting some attention in what should be another standalone issue. Which is fine with me.