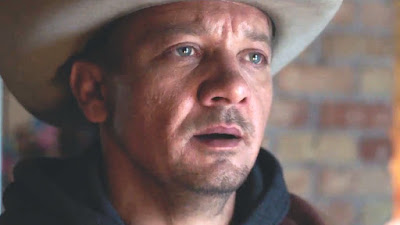 The theater in my area only began screening Wind River this week. I wasn't going to make the same mistake I did with Taylor Sheridan's other works and miss the films theatrical run. When I entered the theater (roughly about 5 minutes before the film started) I was shocked to see I was the only person there. The film obviously went under the radar of casual fans.

Wind River is Sheridan's debut as a director but his screenwriting efforts have been nothing short of impressive. Both Sicario and Hell or High Water belong among the stronger films released in their respective years. The film really could be a wrap on what is a cool little unconnected crime drama trilogy.

I'm going to cut right to the chase and admit that this film probably isn't as good as Sicario or Hell or High Water but its still a memorable film. Indian Reserves don't often get explored in mainstream film very often. Cory Lambert (Jeremy Renner) is a wildlife officer who works in snow covered Wyoming who comes across the frozen dead body of a young Native woman inside the Wind River reserve. A girl who has a bit of connection to Lambert's past. He was formerly married to a Native woman and the pair have a young son together. FBI agent Jane Banner (Elizabeth Olsen) comes in from Las Vegas to investigate and requests help from Lambert with the case because of her lack of knowledge about the area.

Sheridan obviously points out the limitations on the Reserves as there is such a small group available to help Banner with the case and the town is so isolated that there is really no choice other than attempt to catch the killer with help of the Native Sheriff Ben (Graham Greene). The surrounding agencies seem set on ignoring the tragedy and the small group are left to find the answers themselves.

Jeremy Renner is a far better actor than most people remember. Taking a back seat in the Avengers and Mission Impossible franchises cause people to forget that he's a totally capable leading man. Despite being a white man Renner's character is respected around the reserve and the character stays fairly low-key. Renner shares two great scenes with Gil Birmingham (who can be recognized as Jeff Bridges partner in Hell or High Water) where both men have respect for each other and have gone through a lot of the same hardship.

I appreciated the relationship between Renner and Olsen as well. They obviously have some history together as they both appear in the Marvel films but Olsen knows that she would be lost in this mystery without Renner's help. I was glad to find that there is mutual respect between the character but there is no attempt to bring them together in a romance which would've felt cheap.

Sheridan lack of experience could be considering a hindrance on the film. There is no doubt that there is endless potential for him as a director but I would argue that I probably could've watched another 20 minutes of story here. The pinnacle of the film comes a little earlier than I expected and the pacing gets a little wacky in the last half hour. Sheridan isn't afraid to get a little brutal in the final minutes as the investigators start to piece things together.

Wind River is a film that I will revisit. Maybe following up Sicario and Hell or High Water. While the film is the weakest of the bunch it reinforces the fact that Taylor Sheridan is one of the strongest talents in the industry. His involvement in a project is going to be me automatically interested.