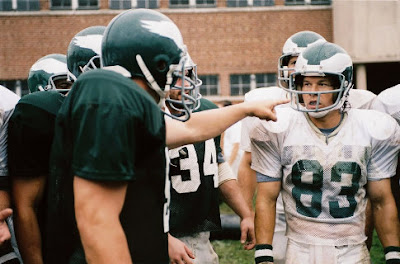 AMC just so happens to be on preview right now by my satellite provider and during the month of Fear Fest no less. So I'm recording a mess of cable movies on my PVR to check out and I'm sure in the coming weeks most of them will be horror. The one day this week just so happened to be sports drama day so after I watched Moneyball (which I've already seen) with varying degrees of attention I decided to check out Invincible, a Disney sports movie detailing the story of Vince Papale a 30 year bartender from Philadelphia who made the Philadelphia Eagles during an open try out.

America's favorite actor Mark Wahlberg plays Papale who had several aspects of his life conveniently changed in order to better suit the story. In the film Papale is a failed substitute teacher turned bartender whose marriage is on its last legs. When new Philadelphia Eagles coach Dick Vermeil (Greg Kinnear) announces an open tryout for all comers. Papale, who is a star of his team of 30 year old friends is convinced to try out.

Ericson Core handles directing duties in his feature debut after serving as cinematographer on several projects including the first Fast and Furious and Daredevil. The first Rocky is a quite obvious inspiration as the blue collar side of Philadelphia is used to great effect. Papale's ensemble of Philadelphia friends aren't exactly littered with familiar faces but the way they get behind their friend is touching at times. Papale does feel like a bit of a different character because he never believes for a second that he is going to make the team, but in the typical "against all odds" fashion not a single member of his team supports his efforts. To say that there are really any magical moments between Papale and Vermeil is a bit of a stretch. Kinnear's performance is good enough but he never really appears to have much of a role. In some ways I like that. A football team is a big entity and the possibility of a coach connecting with all of his players seems a little steep but with that ideal the film sort of wastes Kinnear.

Its obvious to see that this story is as predictable as it gets, but its interesting enough to keep the audience engaged but its not really the Disney sports film that can give you chills like Remember the Titans did. Wahlberg's performance is solid but it doesn't quite do enough to make the film truly memorable. Wahlberg has since made a career out of playing the every day man and this doesn't really belong among his best performances or his worst. A young Elizabeth Banks plays the quite supportive love interest that Wahlberg meets right before his tryout. Banks is cute enough as a character to be likeable, but she takes a back seat to a more interesting sports story. There isn't much conflict there. She just serves as a support to the doubtful Wahlberg.

Disney has done so many of these sports biopics and the scripts have hit a lot of the same notes and the characters are almost interchangeable. Invincible is a crowd pleaser, its just been done better a few dozen times. At least its a better 2006 football film than We are Marshall