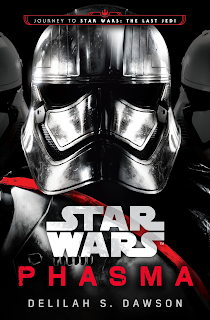 It seems to be a well known fact that most Star Wars fans ended up disappointed with Captain Phasma. The character was a huge part of the marketing campaign for The Force Awakens and then fans were shocked to find that she had just seconds of screen time and basically went out like a little bitch. Obviously the trailers and canon material have revealed that Phasma did not die on Starkiller base and now Lucasfilm is making an attempt to win fans over with some new material. Delilah S. Dawson, writer of the short story The Perfect Weapon, has written a Phasma novel explaining her origin. There is also a comic that explains how Phasma got out of the trash compactor after the events of The Force Awakens as well.

If you are looking for some insight into who Phasma is under the mask this is a pretty good place to start. The novel starts out with a rival of Phasma's named Cardinal who is looking to acquire some dirt on his enemy with the help of a Resistance spy that he captures. Cardinal is responsible for training the stormtrooper children before Phasma begins to train them after they become teens. Cardinal is well aware of Phasma virtually came out of no where and continued to rise up the ranks without any questions asked. When he captures this Resistance spy she begins to tell him the story of Phasma's life when she was still living on her home planet of Parnassos.

Panassos introduces an element that gives this story a Mad Max feel. The world is very post apocalyptic where some sort of explosion or attack killed the majority of the planets habitants and turned the surface of the planet into a desert wasteland. The atmosphere is so harsh that without regular treatment with an ointment created by the people most humans will die.

Phasma and the rest of her tribe meet Brendol Hux (the father of General Armitage Hux from The Force Awakens) when he lands on the planet in an escape pod. A malfunction of some sort resulted his shuttle crashing on the other side of the planet. Hux tells the tribe about the First Order as they have no idea about any sort of galaxy beyond their land and Phasma decides that a life among the First Order would be an improvement over their life on this destroyed world. She and some of the tribe accompany Brendol and a small group of his stormtroopers on the long journey across the planet to find his ship. During the course of their journey they run into to several other groups of people that become obstacles for the group.

Dawson does do a really solid job of creating Phasma into a worthy villain and I hope that Rian Johnson is able to run with the flag in The Last Jedi. The novel is never told from her point of view so we never really know what she's thinking but Dawson really hits home the fact that Phasma is willing to betray anyone to further herself. It helps to explain her motivation for taking down the shields on Starkiller Base with almost no resistance. She may work for the First Order but she will jump off a sinking ship if that's what she needs to do to survive. She develops a relationship with Brendol Hux, who is described as the lazy overweight pig that everyone wants him to be. Hux's involvement in the story really helps to improve what separates the First Order from the old Empire. It also gives us some good connection to the Aftermath books.

The book flashes back and forth between the Absolution Star Destroyer and Parnassos 10 years earlier. I would argue that Cardinal is the best character in the novel. He's been involved in the First Order since its early days and he's done anything that his superiors have ever asked of him, but still Phasma manages to march in and steal a piece of what he has earned. They have a relationship that reminded me a lot of Woody and Buzz Lightyear in the first Toy Story.

The journey across Parnassos wasn't really as exciting as I hoped it would be I was slowly poking through the flashbacks hoping to get more information about Cardinal because he was the character I preferred. The last 100 pages pack a good punch and I burned through them pretty quickly and it really hits home the fact that Phasma is a threat and I feel some hatred towards her but also understand what she has done. That's what a good villain should do.