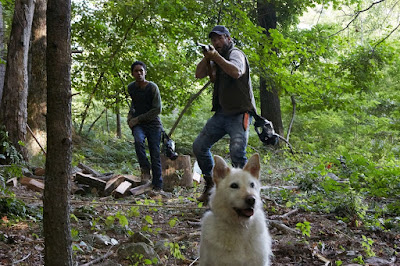 Indie horror films tend to be the horror movies that impress me. They don't have to rely on jump scares like the mainstream horror films do and can rely on the natural scariness of their premise. It Comes At Night is another addition to that pack. It creates a great environment that allows the horror to progress naturally and it stays grounded and only tells you what you need to know.

It Comes At Night is set in what is probably a post-apocalyptic universe but it is never really explained what brought an end to civilization as we know it but then again it doesn't really matter. This film has less than 10 characters that matter at all (one is a dog). Paul (Joel Edgerton) and his family live in their isolated home far from any other human beings. They are an interracial family with Carmen Ejogo playing his wife Sarah and the fabulous Kelvin Harrison Jr. as their teenage son Travis. The family get an unexpected visitor one day in Will (Christopher Abbott) a young family man who left his family in order to find some water. Will offers to trade other resources to the family in exchange for water but instead Paul offers Will the opportunity for him, his wife (Riley Keough) and his young son Andrew (Griffin Robert Faulkner) to move in with them and compile their resources.

I'll keep spoilers to a minimal but there is a pretty vague virus that has been infecting some people and its a source of a lot of paranoia for both families and one person getting infected could put the whole group in jeopardy. Edgerton is the true standout among the cast and he creates a character that is willing to do whatever it takes to ensure his family's safety even if that means he has to take some desperate measures. While the families are able to cooperate they are both aware that if the shit hits the fan it is every man for himself. Each character is well grounded and the whole story feels like something that could actually happen. Desperation and paranoia of the characters feels very natural.

While Edgerton is the most recognizable face in the cast, followed by up and coming star Riley Keough it feels like its Kelvin Harrison Jr. that is the real star of this story. His fear of basically everything around builds and builds over the course of the film and it leads to some permanent results in what is probably one of the most strong and brutal finales of any film this year.

If I had one major complaint about the film it would be the title. I don't really have an proper replacement for the title but It Comes at Night doesn't really properly explain what this film really is. Don't expect any monsters to show up and eat the cast because this is a slow and natural burn. Its still one of my favorites of 2017 though.

It Comes at Night gets 84 out of 100
Labels: drama horror joel Edgerton thriller