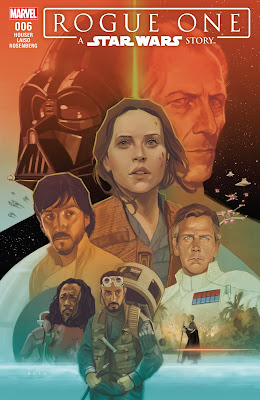 This issue will bring the Rogue One comic to an end. Its been a far better adaptation than The Force Awakens comic was. When we last left the Rogue One group the assault on Scarif was in full swing.  The Rebel fleet has decided to join in on the action and help out the Rogue One group who had defied their leaders and left Scarif in search of the Death Star plans. Jyn and Cassian have just found the plans and now they must steal them.

The deaths start to begin in this issue as the story comes to an end. This issue find itself a little rushed and doesn't really give us the extra information that we were getting in some of the earlier issues because they do need to bring the story to a close.

The comic basically plays out the same as the film does with all the action the film needed to sacrifice some of the great character moments they had in the early issues in order to tell the story as the movie did. The Vader scene is still really cool and the art was really well done. I also liked the touch of ending with the crawl from A New Hope.

This is by no means an essential read. If you are considering reading this comic rather than watching the film then you aren't thinking straight but it does give some fun moments overall and it can be worth your time.