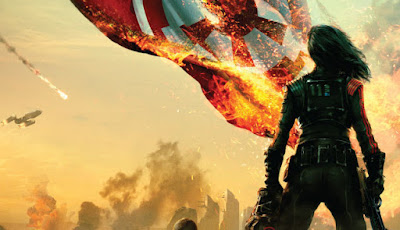 I've been putting off reading Inferno Squad for quite a while now. It came out when I had still not finished the first Battlefront novel, which it basically had no connection to. Much like the first novel, this just serves an introductory novel to the game (which has now come out to mixed results). It introduces fans to the characters that they will be playing with when the game is released.

The main reason I can praise this novel is because it gives us a different perspective compared to other novels that exist in the current canon. Inferno Squad is composed of characters that are empathetic even though they work for the Empire, they are just loyal to the cause. From their point of view they aren't evil and the Rebels are.

The book starts off at the end of A New Hope, the Death Star actually blows up in the first chapter of the film and it gets the book off to a very strong start. We are introduced to Iden Versio, a TIE fighter pilot who survived the destruction of the Death Star who is well respected among the Empire. Her father is a Admiral and her mother is an artist who focused in Imperial propaganda. Iden's father assigns her and 3 other loyal Imperials to a new group known as Inferno Squadron. A group that is responsible to infiltrating certain operations and retrieving information for the Empire. Among Iden's group is Del Meeko, Gideon Hask and Seyn Marana. Each member of the squad has their own specialty whether it is piloting or working with machinery.

After a few small missions to establish a rapport Inferno Squadron is ordered to infiltrate the remaining members of Saw Gerrera's partisans who have renamed themselves the Dreamers. The groups has acquired Imperial Intelligence and the squad must find who the leak is and then eliminate the remainder of the partisans.

The book offers a good look into the partisans who are basically Rebels who are willing to sacrifice far more (perhaps too much). It is explained that the Rebellion is run on hope and the partisans are run on hatred of the Empire. When Inferno Squad breaks into the group they have to live among their enemies in order to find out who is getting the information from the Empire.

Unfortunately, a lot of the members of Inferno Squad spend the book split up. There are less than 100 pages that build the development of the group. There isn't as much of a dynamic among this group as I would like see. Although, it may be a bit of an intention so they could build on the characters in the game. As expected Iden is the most developed of the group. Like most Star Wars characters she has some daddy issues. Her father was so involved in the Empire and his so focused on the legacy of his name that he never really treated his daughter like a child. Iden also wants to prove that she has earned her respect rather than just following her father. The rest of the characters don't get enough attention. Gideon Hask (who has a little history with Iden and her family) get a little spotlight, but still not enough to make me fall in love with him.

When the ending of the book came along I did feel like it was a little rushed. This is a pretty small book at about 300 pages, but the members of this squad are very loyal to the Empire, but I just expected a little more conflict their ideals when they were spending so much time on the other side.

I'm sure that the game would help to build these characters up further, overall I think this book tells an interesting story that we haven't seen much of in the new Star Wars canon. I'm probably never going to play Battlefront II so this will likely be as far as I get with these characters. I did really enjoy it, but there were just a few small things missing.