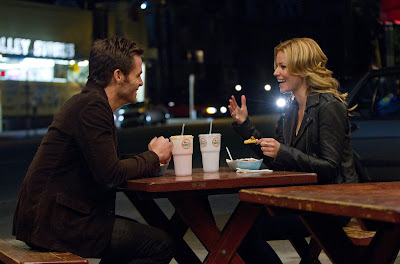 I rewatched People Like Us on cable over the weekend after seeing it for the first time about a year ago and I was surprised to find that I still really liked it. I find a lot of times when I really enjoy a movie that isn't beloved that I lose a lot of satisfaction with a rewatch but that didn't apply to this film. The Rotten Tomatoes score for this movie landed around the 50 range and after looking at some of the reviews it appears that there were some people that really loved the film and then others that didn't care for it. I find myself on the high end with this film.

The film is directed by Alex Kurtzman, who had written a lot of high budget movies to that point, but this is his directorial debut. His second film was The Mummy reboot from 2017. Kurtzman appears to be one of those guys that studios have in their back pocket based on of his work. Even this film is fairly universal and easy to watch.

Sam (Chris Pine) is a salesman on the brink of a bankruptcy when his record executive father passes away and unfortunately Sam doesn't get the inheritance that he desperately needs. Instead, as executor of his father's will he is forced to give $150,000 dollars to a sister that he never knew he had. He meets his sister for the first time and finds out that she is a single mother and former alcoholic with a 11 year old son. He begins to try to develop a relationship with his sister without telling her who he is.

I can understand why people are a little critical of this movie. It may have some exaggerated drama and its very predictable, but the characters matter to me and I was really engaged in their story. The relationship that forms between Pine and Banks feels very genuine and it felt at least a little fresh to me because there is no romance between the two (obviously it would've been a little gross if their was). While the situation they were in is a little ridiculous I never felt that it was ever outside of the realm of possibility.

Both characters, as the young kid played by Michael Hall D'Addario are all really charming even though Pine's character hangs on to his secret for far too long as his mother (Michelle Pfeiffer) is unaware of who Banks' character is as well. A lot of people are on the fence about Pine as an actor, but this and Hell or High Water are some of the best examples of his ability.