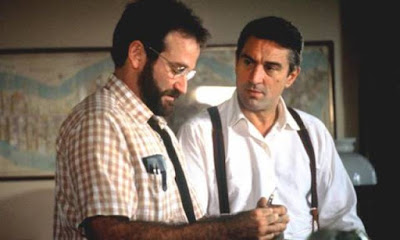 Awakenings is a really interesting film. While I didn't quite love it there were a lot of things that I really enjoyed about it. This was Penny Marshall's next film after Big and of course the fact that she is a Marshall (sister to Happy Days creator and Pretty Woman director Gary Marshall) made me think that would be a crowd pleasing feel good movie. It is in some ways, but the true story keeps them from getting too sentimental with the ending. Marshall herself is famously one half of Laverne and Shirley which was a spinoff of her brother's show Happy Days.

Awakenings is still quite optimistic despite not having the most happy ending. Considering the performances and the Oscar nominations I'm unsure why this doesn't seem to be a more recognizable these days. In one of his earlier dramatic turns Robin Williams plays a character based on a real man Oliver Sacks but for unknown reasons the characters name is changed to Malcolm Sayer. Sayer is a very timid but intelligent man who in 1969 gains employment at the chronic care wing of a hospital. After a lengthy adjustment period for the undeniably shy man he begins to take notice of several patients under his care that are so catatonic that there basically seems to be no life at all behind their eyes. Sayer begins to notice a response from these nearly lifeless people by playing music and if he throws a baseball at them they will surprisingly reach out and catch it.

Sayer then meets Leonard Lowe (played by Robert de Niro) a man who has been in the chronic care unit for 30 years. His mother attends to him every day despite his total absentness but Sayer senses that Leonard may be more active in mind than some of his other patients and with the help of Leonard's mother he uses an experimental drug that magically allows Leonard to essentially come back to life.

de Niro is definitely playing against type in an interesting role when he was still in the prime of his career (this came out the same year as Goodfellas). Its his great performance that makes me wonder why no one ever talks about this film anymore. It may be that roles of this quality are some plentiful for a legend like de Niro. Seeing the delight on de Niro's face when he can suddenly walk and talk and experience life again almost brought tears to my eyes. The character really made me think what I would ever do if I was stuck in the same situation. Leonard Lowe has basically lost 30 years of his life that he can't get back but he still has such a optimistic look at life and refuses to waste it after spending so many years in a chair. There was one big issue with the performance and that was that de Niro had been in a vegetative stare since boyhood but he had somehow developed through his trance. He never really had the naivety you would expect from someone who was asleep since he was a teenager.

de Niro's performance definitely got the glory as he received another Oscar nomination, but I think William's role deserves a lot of credit for taking the subdued route and allowing de Niro to play the big role. Williams easily could've tried to Patch Adams up the performance and try to draw attention towards himself but he doesn't. Williams character continues to notice his love for people in his patients who are eventually all "awakened" from their states. Sayer becomes desperate to make sure that the awakenings last carrying the weight of all his patients on his shoulders. While it never feels too invasive Williams character same some very light hearted comical moments with some of his patients, but its never enough to take away from the seriousness of his duties.

You could probably argue that the film is a little manipulative and perhaps tries a little too hard to be charming, which is obviously a Marshall trademark. There is a bit of dark turn in the final act that didn't feel very smooth at all. I didn't enjoy the second hour as much as the first, but I would say that de Niro's performance does take a turn for the better in the third act when it becomes obvious that his drug is beginning to have some side effects.

While I'll admit the ending is a happy one it isn't really what you would expecting considering the good natured tone that the movie nearly keeps throughout the runtime. Without the two brilliant performances this probably would've been a much weaker film, but the message of the film couldn't be more clear.