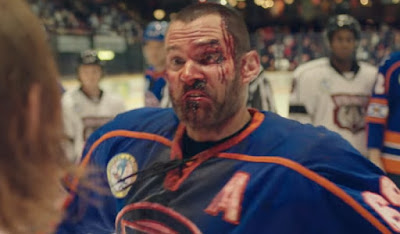 The first Goon was a surprise cult hit after hitting DVD and Netflix after its release. Its success motivated writer Jay Baruchel to begin work on a second movie, one that he would direct. Last of the Enforcers picks up with Doug Glatt (Seann William Scott) still playing for the Halifax Highlanders. He is given captaincy of the team at the start of the film, but the high note doesn't last long after he gets his ass handed to him by Anders Cain (Wyatt Russell) and Glatt injures his arm leaving him unable to play.

Glatt's wife (Alison Pill) finds out that she is pregnant and Glatt is forced to get a job in insurance to support the new baby, but he gets sick of it almost instantly and tries to find a way back into hockey with help from his former rival Ross Rhea (Liev Schreiber). Its very close to the plot from Rocky III, but it doesn't really hang on to that storyline for long. To the point where it starts to steal from Rocky IV a bit too.

I enjoyed Last of the Enforcers but its not hard to tell that it doesn't have the heart that the first Goon movie had. Seann William Scott proved with the first movie that he was actually a solid actor and his reprises the role with a similar effort here. The dumb but good hearted Glatt is a character we can root for. On the other side of the coin Wyatt Russell plays a villain who is easy to hate. His character path is a little more excessive than it really needed to be. I didn't feel like they needed to rely as much on that character as they did. Schreiber has another enjoyable arc as well and I'm glad he chose to return for the sequel because he was great in the first movie.

Jay Baruchel's inexperience as a director is what limits this film. The hockey scenes are well executed and the fight scenes are delightfully over the top, but there are a lot of elements of the movie that probably could've been left on the cutting room floor. Sometimes it feels like Baruchel is rushing some story elements while not exploring enough of others.

The movie does end on a high note and while not as funny as the first movie I'm sure that fans of the first will find something to like in this sequel. If you weren't a fan the first time don't expect to be won over here. The character still feel fairly charming and there are some nice Easter Eggs for fans of professional hockey with several NHL pros getting cameo appearances. Wyatt Russell himself was actually a former professional hockey player in Europe, you learn something every day. Baruchel's brash character takes a bit of demotion with this sequel probably to devote more time to directing but the side characters do bring some delight in Elisha Cuthbert's character and TJ Miller's mouthy sportscaster. Overall, its passable. I'm Canadian, I love anything hockey related.