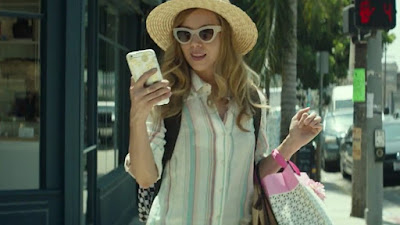 I can't emphasize how timely Matt Spicer's Ingrid Goes West is. Its a satirical look at our obsession with social media and how a few websites have invaded our lives and become more important than they have any right to be. Not only do social media sites try to attract an unnecessary amount of our attention but they also create an alter ego for us in some ways. There are few people who are the same person they are in real life that they display on social media.

Aubrey Plaza plays Ingrid, a young woman with an unhealthy dedication to social media. She finds a new target for her obsession in an Instagram celebrity named Taylor Sloane. Sloane makes such an impact on Ingrid that she decides to use her newly acquired inheritance money to move to LA and become Taylor's friend using whatever technique is possible. Even if that means stalking her new social media crush.

Plaza's already made a career of playing characters that are unstable but sympathetic and Ingrid could be her best performance yet. For as unbalanced as she is Ingrid is still an interesting character and I found that I could understand why she would do some undoubtedly questionable things. Elizabeth Olsen could also being giving the performance of her career as playing the social media savvy chick that I love to hate. Taylor's Instagram profile (which apparently actually exists on Instagram) details what should be the perfect life in Ingrid's mind and when Ingrid muscles her way into her real life she realizes that her life is far from perfect and Taylor has been putting on an act that Taylor herself doesn't appear to be aware of.

Ingrid gets herself situated in LA by renting an apartment from a Batman-obsessed screenwriter named Dan (played by the delightfully likeable O'Shea Jackson Jr.) and she finds crafty ways to become Taylor's new pal by using her own Instagram posts to stalk her. Quickly she meets Taylor, her hipster artist husband Ezra played by the charming Wyatt Russell and suddenly she's joining Taylor in her perfectly executed Instagram posts.

What I love about the relationship between Plaza and Olsen is that they are both obviously crazy but Plaza tends to wear it on her sleeve more than Olsen does. Taylor is so disingenuous and later on in the film we learn more about her own journey to becoming an "Instagram celebrity". Her character becomes all about what will bring her the most likes which only require a click and possibly even less than a second of satisfaction from her "fans". On Instagram she is "obsessed" with everything and everything is "perfect". Spicer's dialogue really just hits home the lingo that these social media bitches use. I couldn't believe how much of it felt like people I know.

O'Shea Jackson Jr. displays the only glimpse into real life that Ingrid gets and she still uses him to try and win Taylor over. Jackson proves to be very charismatic much like he was when he played his father Ice Cube in Straight Out of Compton. For as good as Olsen and Plaza are he nearly steals the film.

The story takes a bit of a dark turn as you would probably expect in a dark comedy. It may be a little rough in the final minutes but I really enjoyed how much this film made me think. I don't do a lot of posting on social media because I find that every thing on there is so fake. Even passionate argument on Twitter or Facebook are more about attention than anything. In some ways the film almost pisses me off because I feel like some people aren't going to get the message from this. I have a dozen friends that remind me of Taylor (while not as far fetched). I really hope that this film will cause people to hold the mirror up to themselves and realize just how much social media has changed them.