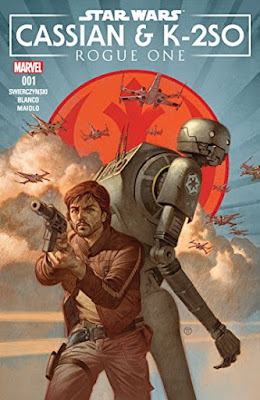 Cassian Andor and his droid sidekick K2-S0 were two of the most popular characters introduced in Rogue One. Lucasfilm decided to explore their relationship a little further with a prequel comic that explains how Cassian met up with K2 (who was a reprogramed Imperial droid). This one shot comic is written by Duane Swierczynski with art by Fernando Blanco.

The comic starts off with Cassian teaming up with two alien creates who do not speak, Kertas and Rismor. They have their conversations by scent. The trio are in search of some Imperial intelligence when they run into K2-S0 who is still with the Empire. Cassian finds a way to erase his memory and turn him over to his side giving him another ally for his escape.

K2 provides some of the humor we love from Rogue One and he struggles with his programing and taking simple orders from Cassian. That character certainly delivers. This is more of an adventure comic that one that really tells us a lot about the characters. Its a shame that its a one and done issue because I would've loved to see more character work. Cassian doesn't get any depth but the action is certainly strong and the art is really well done.

I enjoyed this comic overall. I just wish that they could've given a little more insight to the characters but I know its hard when you only have one issue to tell your whole story. If you liked Rogue One I can still recommend this.