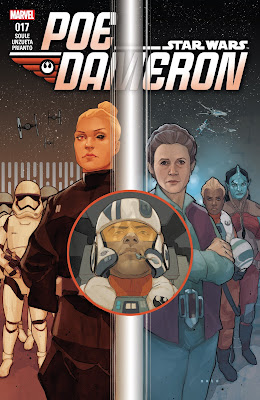 A new arc of Charles Soule's Poe Dameron comic has begun. Poe Dameron and the Black Squadron were successful in stealing their fuel from the last issue and issue 17 has Poe teaming up with a new/old friend.  Enter Suralinda Javos, anyone who has been following the comic knows that he appeared months ago as a journalist trying to leak secrets about the Resistance but she had a change of heart. Sura find herself low on the Resistance ladder and she is simply a janitor but Poe and General Organa have decided to give her a new chance.

The Poe comic has done a really good job of elaborating on the political state of the galaxy during the time of The Force Awakens. Leia explains that despite their triumph in the fuel story they have been running out of resources and the people who were supporting the Resistance have started to fade as time has gone on. The First Order continues to gain more supporters despite Leia's opposition. Leia plans to use Sura to help get the Resistance back in the public eye by leaking some documents that show some of the good that the Resistance does. On the other hand C-3P0 has to use some of his top secret droid spies to reveal some of the brutalities that First Order have been pulling off.

Cut to Commander Malarus, who is fresh off her defeat by the hands of the Black Squadron and looking for revenge on Poe. Captain Phasma has allowed Malarus to do what ever it takes to bring an end to Black Squadron. She needs the help of Dameron's former enemy Agent Terex who has become her servant thanks to some implants in his brain.

Black Squadron are forced to split up with one half accompanying Sura with her mission to get dirt on the First Order and Poe and canon mainstay Snap Wexley team up once again in search of Oddy Muva who disappeared while on a mission with Poe a few months back. If you aren't familiar with Oddy then Soule will conveniently get you up to speed.

Sura is going to be a great character as she isn't 100% trustworthy right now but you can tell she cares about the cause. It looks like this arc may also give a little character development to Jess (a member of Black Squadron). The members other than Poe haven't been explored much in this series and its good to see a background character get some attention for once.

This proves to be a great issue to try out if you want to pick up the series for the first time. Even the characters that have already been introduced in earlier issues get explained further so new readers can get caught up. The art continues to blow me away as well even with the recent change in artists. Poe and Leia continue to be well done without being copied right out of the films like the Star Wars comic has been doing. This is a great issue for old and new readers and it looks to be kicking off an interesting story.