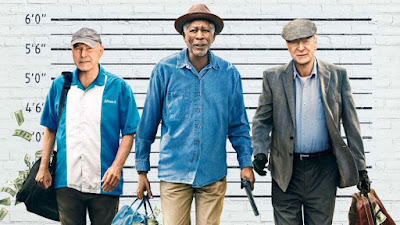 I expected Going in Style to be a lazy attempt to score some money from an older demographic. These movies with aging stars tends to drag people to the theater that don't go very often and tend to make a pretty respectable profit doing so. However, I was surprised to see the talent behind the film. Zach Braff of Scrubs and Garden State fame is in the directors chair and Theodore Melfi, writer and director of Hidden Figures and St. Vincent wrote the script. I didn't know until the film finished that this is actually a remake of a film from back in 1979 with the same name.

Going in Style features three aging men who decide to rob a bank after their pensions dry up and they start to struggle to support themselves. Joe (Michael Caine) witnesses a bank robbery and the thrill of witnessing the event motivates him to make an attempt as well. He just needs to convince his friends Willie (Morgan Freeman) and Albert (Alan Arkin) to help him out.

This could've been a much more lazy effort than it actually was. Going in Style is actually pretty charming. It'll never have you rolling on the floor laughing but the humor delivers and the characters are worth following. Its nice to see Michael Caine, Morgan Freeman and Alan Arkin getting a chance at leading roles after years of great supporting parts. Caine and Freeman have obviously worked together quite a bit in the new millennium with The Dark Knight trilogy and 2 Now You See Me films and this just looks like a fun project for 2 friends. The group deliver on their performances. None of them are sitting back and mailing it. Their characters have been lifelong friends and the chemistry is good enough to believe that.

I was shocked about how well the characters worked. The script is a little manipulative at the start by painting the banks as the villain and the old men as victims but each member of the trio gets some exploration and by the time they plan the heist you want to see them succeed. Michael Caine probably has the most rich character of the three and his granddaughter played by Joey King has some great moments with him as well.

The film runs at about 96 minutes and the actual heist occurs at about an hour in. The film just sort of treads water after that. It felt like the final product would've possibly benefitted from cutting 10 minutes or so but the film is still very watchable despite losing some steam.

I also have to give a shout out to Christopher Lloyd who sporadically appears as a member of the senior group that Caine, Freeman and Arkin are attached too and his absentmindedness is the cause for some good laughs. It was great to see him again.

Overall, Going in Style is not the least bit inventive but it is well executed. Its a nice feel good film. I had a smile on my face when the film ended and I don't have any problem with a crowd pleaser if it earns it and I felt that Going in Style does just that.