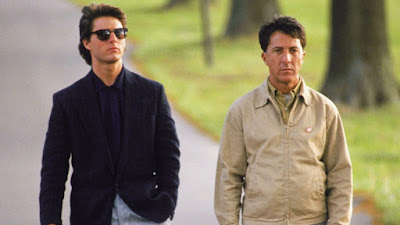 Rain Man is one of those timeless stories that everyone should experience once. Some cinephiles have dismissed it as its aged but it's hard to dispute 4 Oscars including a win for Best Picture in 1989. It's a great family movie and it's a great road trip movie.

Tom Cruise stars as Charlie Babbit and Dustin Hoffman plays his brother Raymond. Charlie is a car dealer who returns home when he learns of his dads passing. It there that he learns that his estranged father left the majority of his estate to a brother that Charlie ever knew. When he meets his older brother Raymond he discovers that Ray is a savant and has no concept of money. Charlie abducts Raymond and they travel across the country to LA.

Rain Man really develops as Tom Cruise's character does. Cruise is perfectly cast as Charlie Babbit,a selfish young man who never saw eye to eye with his father. Charlie is arrogant and selfish but Cruise still brings some likeability to the character. Charlie is in a tough spot financially and the money he felt that he was entitled to would be more than enough to get him out of his hole. He feels that his father has been torturing him from beyond the grave.

We are well into the film before Raymond appears. Hoffman's performance as Raymond is easily one of my favorite performances of all time. Hoffman actually studied for the role alongside a real savant in order to plan for the role. Ray is unable to develop true connections with other human beings and his life is based on a true routine. He watches the same tv shows at the same time every day, eats at the same time everyday and goes to bed at the same time. What's really special about Raymond is that he has the ability to remember an incredible amount of data. This is displayed when Charlie's girlfriend Susana (Valeria Golino) finds some of Ray's baseball cards and his is able to memorize a players complete stat line just by hearing the players name.

Charlie and Ray clash from the moment they hop in their dad's 1949 Buick Roadmaster convertible (one of my favorite movie cars). Charlie is able to understand Ray and has a very short fuse regarding everything he does. Susana eventually gets fed up and leaves. Cruise eventually starts to connect with Raymond after a great scene that reveals some unknown information. By the end of the film there are some great moments between the unlikely duo. Hoffman is basically old enough to be Cruise's father yet somehow Cruise almost plays the big brother role to Hoffman. Charlie starts to realize that taking Ray out of his routine still allowed him to thrive despite his impairments.

Rain Man has a story that still continues to work almost 30 years later. Its still very much an 80s film right down to Hans Zimmer's music. It shows that brotherly love can conquer all impairments and its a great film to show the family.

Rain Man is one of the first mainstream films to showcase a savant. Its a lot more common now to see a character with these abilities and there are a lot of film that steal a similar template to this film even now. The script won best screenplay at the Oscars and director Barry Levinson took home an Oscar for Best Director. Hoffman, of course won his second Oscar, an award that is truly deserved.