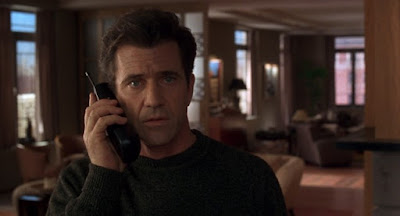 Movies about kidnapping can be brutal but it can make a pretty tense premise when its done right. Taking away a child is a great way to get the audience engaged with the characters and to keep their attention. Ransom is one of those films that has been swept under the rug after becoming a successful box office hit in 1996, but when I checked it out I was surprised to see how good it was.

Mel Gibson is about the height of his fame at the point this film is released. He's coming off his Oscar wins for Braveheart and he teams up with Ron Howard who has just come off Apollo 13. Ransom shows that they make a pretty good pair.

Tom Mullen (Gibson) is an airline owner and a multimillionaire who lives a very comfortable life with his wife Kate (Rene Russo) and his son Sean (Brawley Nolte). Their world comes crashing down when Sean is abducted by a crew of kidnappers. Tom finds himself forced to pay a ransom if he ever wants to see his son again. When attempts to pay the ransom fail and Tom becomes even more desperate he turns the table on the kidnappers by using the ransom as a bounty for the capture or death of the criminals.

What I really love about this film is the fast pace. Its not a short film at 2 hours but it kept my heart racing. Sean is abducted within the first 10 or 15 minutes and the story continues to ramp up from there. The story doesn't let up until the credits roll. Ron Howard is one of the directors that can do anything if he has a great script and the Ransom script is tight and Howard transforms it into an addictive thriller.

Gibson is obviously the star of the show as he's able to capture the desperation that his character feels to pay the ransom and get his son back but he's not stupid man either. The kidnapping starts a media circus thanks to Tom's wealth and he uses it to his advantage. Gary Sinise, in a unexpected villain role becomes the perfect foil to Gibson. Watching this two clever characters trying to outsmart the other is such a treat. Sinise's character is complete scum and the audience just wants to see him die in a fire but he's so clever that you hate him but he's still so interesting.

Thanks to the media's involvement a simple ransom procedure gets way out of hand and both sides start to lose their confidence. Tom's wife starts to doubt him as the situation gains steam and the kidnappers (who also include Donnie Wahlberg and Liev Schreiber) start to turn against each other when things get way more complicated then they've originally expected. Tom's bounty on the criminals becomes a very controversial topic as the public doesn't know the whole story. Despite his controversial move Gibson's character remains likeable as he's just doing what he feels he needs to do to get his son home safe.

Ransom is unpredictable. During the whole event I never really had any clue how the story would resolve itself. Unfortunately I found that the ending did have a bit of a convenient solution considering its severity. The film is R rated and but the ending feels a little limited. Still I couldn't believe how much I enjoyed this film. I consider it a forgotten little gem.